When I think of rentals, many ideas are conjured including cost, size, location etc.
Rental costs vary in cities. Tel Aviv and Jerusalem for example have high rental fees comparatively to Beit Shemesh,Kiryat Gat, or Beer Sheva. In these areas one can find decent rentals .
When looking at rentals, one must pay attention to many pointers .One does not want to rent a home that has damp issues, or requires work that has not been done.
Even better, beware of homeowners who promise to deal with issues that have not been dealt with . If you came to look at the apartment and serious issues have not been
dealt with BEFORE viewing , you will want to inspect it AGAIN before signing a contract.
Renters should take all costs into consideration to verify that the apartment they
are interested in, they can afford and not THINK they can afford it.
For example, this 6 square meter kiosk rents for 12,500 shekels a month.
Can you afford the rent? The municipal tax? Any related maintenance fees?
This does not include water, electricity, gas etc.
Got any questions, feel free to contact me. 🙂

END_OF_DOCUMENT_TOKEN_TO_BE_REPLACED

Nowadays if you have a question, looking for information, or just curious the best thing to turn to is …the internet.
For example, my dog eats rather quickly and I want him to enjoy his food. This caused me to wonder if there are toys “out there” that can slow down his eating whilst making me feel good thinking this will force him to “enjoy his food”.
So what did I do? “flick” turned on the computer and asked google what items are available to purchase.
It’s interesting how originally my intention was to spend 20 minutes researching,
turned into at least double that time.
Since internet is readily available, companies want to offer all the information
a consumer is looking for and beyond what they are looking for, we end up spending
more time than expected and may end up spending more than initially expected.
This does not include all the side advertisements that “bling” on the side, attracting your attention to click on their “awesome deal”.
Maybe BEFORE entering the internet world, one should arm themselves with well
thought out intentions so as not to get sucked into the internet shopping world
and your credit card maxed out. 🙂

END_OF_DOCUMENT_TOKEN_TO_BE_REPLACED

We have figures for areas like Ashkelon rising at 15% 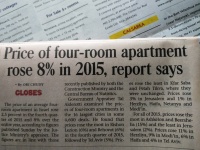 So where is Beit Shemesh? Have 4 room apartments risen as well?

Here is an indication of 4 room apartments that have sold

If you own an apartment or home and you haven’t moved in yet?

You can get a waiver on  payment for arnona . The apartment must be 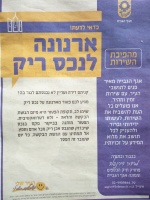 empty, there will be a municipality agent to photograph and check verification  that no one lives in the property.

Own a small business or want to open a small business? The European Investment Fund and Bank Leumi signed an agreement allowing higher lending to innovative small and medium size businesses .Bank Leumi could provide finance of $100 million to technology companies in Israel . If hi -tech is no longer a leader in the Israeli economic growth maybe this could give it a boost.

END_OF_DOCUMENT_TOKEN_TO_BE_REPLACED

The price of 95 octane gasoline  will fall from NIS 5.99 to NIS 5.84 on January 1st. The main reason for it is the sharp fall of oil prices on the world markets.

END_OF_DOCUMENT_TOKEN_TO_BE_REPLACED

This article is meant to  give ideas to children who have elderly parents or parents that can’t care for themselves. I am not sure if the ideas in this article is ideal. Owning a home is a goal we all try to achieve, at least in Israel. To consider a reverse mortgage one must weigh its merits heavily.The new trend in purchasing a home or apartment is having a smaller unit attached to the property so it can either be rented out or used to care for elderly parents.

How to care for two parents at once  without going broke

New York (Reuters)- For years, Madeleine Smithberg has been at the forefront of American comedy as cocreator of The Daily Show and a talent coordinator for Late Show with David Letterman.

That sense of humor was especially handy during the last few years. That is because Smithberg had to cope with not one but two elderly parents in rapid decline.”It’s heartbreaking”, says Smithberg, 56 who has a production company in Los Angeles. “And yet it’s invisible, because nobody talks about it”.

Dealing with one aging parent is challenging enough, whether you are helping navigate the complex health-care system,  paying for an assisted-living facility or struggling with cognitive decline as the parent slips away. But the emotional and financial stress can be more than double if you are caring for both parents at he same time.

END_OF_DOCUMENT_TOKEN_TO_BE_REPLACED

According to the Ministry of Construction and Housing figures, construction began on 680 three-room apartments in the first quarter of the year, 5.5% of all the building starts in the quarter. Three-room apartments started totaled 1,764 in 2014, only 4% of all building starts that year, an average of only 441 per quarter, 239 (50%) fewer than the number in the first quarter of 2015.

Continuation of the article – http://www.globes.co.il/en/article-small-apartment-building-starts-up-sharply-in-israel-1001072256

The Knesset on Monday approved Finance Minister Moshe Kahlon’s plan to increase taxes on apartments, a move intended to steer existing apartments out of the rental market and onto the sales market.

By making it more expensive for investors to buy apartments for renting out, the Finance Ministry hopes to keep more apartments on the market for home buyers, thus driving down the sales price.

The law will go into effect on June 24, not July 1 as earlier planned, in order to cover apartment buyers looking to quickly close deals ahead of the law coming into effect.

“I’ve seen the entirety of things they (the Finance Ministry) want to do in housing, and for the first time we are talking about a serious process and, if it comes to fruition, we are on the right path,” said Finance Committee chairman MK Moshe Gafni (UTJ).

Zionist Union MK Manuel Trajtenberg, who had run as his party’s nominee for finance minister, congratulated Kahlon for getting the ball rolling.

“This is the first step in the right direction after six years of absent policy for failed attempts to deal with the insane increase in home prices,” Trajtenberg said.

The bill hit a brief sang when opposition parties objected to how the new rules apply to siblings who inherit an apartment. The apartment would be considered an investment apartment only if three or more siblings inherit it.

“You must find a solution to inheriting siblings starting at two siblings, and not just from there up,” said Zionist Union MK Erel Margalit. “We should define ownership as over  ‘a portion of the apartment’ and not a third of an apartment.”

The treasury promised to address the issue within a month, and the provision of a temporary measure in the bill brought most of the opposition on board to support it.

Finance Ministry director-general Shay Badad noted that the policy was the first in a series of steps intended to increase the supply of housing, but said this step was one that could have an immediate, if limited, impact.

Every percentage increase in the purchase tax, he said, would reduce the market of investors by 10%.

Price of average home increases despite fall in sales

By Ori Chudy and Shlomit Tzur

August is the most active month in the residential rental market, especially with the new academic year approaching. Added to the pressure this year is the expectation that promised government programs will make buying an apartment cheaper, which is encouraging potential buyers to continue renting and to renew leases.

In the Sharon region, average rents have risen 73% since 2007, while rents for large apartments increased 785.

The lowest rents in the second quarter of 2014 were for small apartments (1.5 to 2 rooms) in Haifa and its Bayside suburbs, at NIS 1,654 per month. In 2007 they were also the lowest rents nationwide at NIS 1,250. That is still a  32.3% increase, with a  5.5% annual return on investment for landlords.Renting out an apartment in the North yielded an average return of 5.2%.

Returns on investment for small apartments were 4.5% in Haifa, 4.2% in the central region and 4.75 in the South.

The lowest return for landlords for renting out large apartments in Tel Aviv and in Haifa, at 2.5% in both cities, despite the difference in prices.

There was a major slowdown in home sales in the second quarter, mainly of new homes because of the governments plan to charge 0% VAT to new home buyers. However, the low number of deals did not stem rising prices.

The bill now moves on to the Knesset Finance Committee.

The changes already made include raising the eligibility threshold for applicants who did not serve in the IDF or National Service from NIS 600,000 to NIS 950,000, and eliminating the eligibility document. The revised bill also sets September 1 for the law to come into effect.

The bill is also opposed by Bank of Israel Governor Dr. Karnit Flug who fears that much of the savings in 0% VAT will not find its way into the buyer’s pockets.

* The big question is, who will it benefit?

The goal is for the Knesset to approve the zero VAT bill for first-time homebuyers by September 1.

The cabinet today unanimously approved the zero VAT bill for first-time homebuyers of new apartments. The bill now goes to the Knesset Finance Committee and to the Knesset plenum. The goal is for the Knesset to approve the bill by September 1.

For the law to come into effect as planned on September 1, the parties involved in writing it must complete all preliminary work. Government Assessor Tal Alderotti must draw up the price per square meter tables for each area where the tax break will apply, the Israel Tax Authority will have to prepare a mechanism for the public to access information about the tax break, and the ministers of housing and finance will have to set precise specifications about the applicable apartments.

The maximum price for which a VAT exemption will be granted to those who have not served in the Israel Defense Forces (IDF) or civilian national service, it is believed, will change from NIS 600,000, as the Ministry of Finance announced yesterday, to a larger amount. This follows the stubborn objections of Minister of Construction and Housing Uri Ariel, and comments by the Minister of Justice, and the Attorney General that if there are insufficient new apartments in this price range then the price will change.

“The compromise presented by the Ministry of Finance for the VAT criteria is unacceptable,” said Minister of Construction and Housing Uri Ariel at the Knesset Finance Committee meeting on the housing crisis. “The compromise needs to be more egalitarian. I repeat: there will be no NIS 600,000 limit for people who did not serve, it won’t pass. Why? Because there are no such apartments, maybe a few, and, in addition, the Finance Committee, in my opinion, will not allow it.” Ariel’s comment comes after he attacked the compromise as unrealistic yesterday, following its announcement by the Ministry of Finance. Ariel also said he would be speaking to the Attorney General to emphasize that there are no new apartments for NIS 600,000 on the market.

It appears that Minister of Justice Tzipi Livni is also demanding explanations about the compromise. Livni instructed Ministry of Justice Land Appraisals Council chairperson Tal Aldrussi to check whether the data presented to the Ministry of Justice in the discussions of the zero-VAT agreement are correct and accurately reflect the reality in the market.